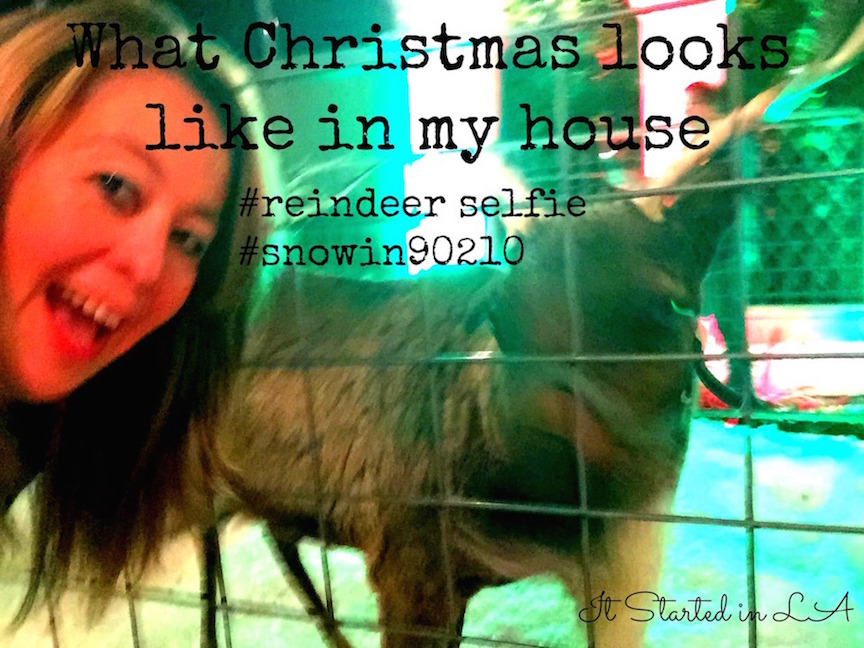 I was more than a little bit excited when the marketing director from Patience Brewster wrote to me and asked me if I was interested in writing a post about our family’s Christmas traditions.  Yay!  Someone new has found me!  Yay!  A paid post—my first!

Well, not quite.  It is simply an idea as the company is so passionate about Christmas—Patience is an artist who makes beautiful Christmas ornaments—that it hopes I’ll be inspired to write more about Christmas at my place.  Which I did.  And here I am.

I never thought about writing about our Christmas traditions.  And it’s funny I’ve been asked to write about our traditions now because never has it been debated more in my family than it has this year.

My daughter started Christmas discussions early.  “I’m not going away for Christmas this year,” she announced in no uncertain terms.  “I’m sick of my Christmas being ruined because we’re always away.”

Mr H and I met in Melbourne, Australia where we both grew up—him more than me but that’s always been our Homebase as we expated around the place.  We moved to Sydney for his work and we bought our first house there.  We had our kids there and bought a beach house in the stunning Jervis Bay so Sydney is home.  We used to go to Melbourne for Christmas and even spent a couple of Christmases in Wales (where my parents ended up moving).

As the kids got older it became apparent to us that we needed to spend Christmas in our own home and wake up in our own house rather than other people’s.  Add to that the fact that bringing all the presents down and carrying ours back up again was a logistical pain in the backside.

When we bought a beach house Christmas would be spent down there; it’s Australia after all and Christmas is directly associated with summer and the beach.

Well, according to my daughter that there is where the problem started—the beach house.  While Mr H and I considered it home—and being home—she didn’t share our sentiment.  To her being home was in the primary house she spends her time.  And nowhere else.  (But we didn’t really know this at the time.  OK we might have but we might not have taken her that seriously).

Where to spend Christmas

Cut back to last year when we moved to LA and Mr H and I just wanted a resort holiday for Christmas.  We’re used to moving in down at our beach house and spending the better part of six weeks down there (it’s our summer break) and we were missing that this year.  Add to that the kids didn’t have an American summer break (they finished school in Australia, had a week or so off then started a brand new school year) so we decided a relaxing holiday doing absolutely nothing but eating, drinking and lounging by or in a pool was just what the doctor ordered.

I had never been more relaxed.  I didn’t have to worry about cooking, instead spent the day by the pool and got myself a massage.  What could be better?

Well apparently to the rest of the family a lot could be better.  They could be playing with their new things while they watch me cook a Christmas feast; they were missing their traditional Australian Christmas.  My son (who rarely has an opinion on anything) announces.  “Mum, next year I want pork, ham and turkey for Christmas please.  At home.”

Well one out of four being happy is good enough for me!

As we “discuss” Christmas this year it’s interesting to see everyone’s take on it.  The rules of engagement for Christmas in our house are pretty much as follows (and the list of “demands” set out by all and sundry in order for Christmas to feel EXACTLY like Christmas Day).

We all drive over to our close friends’ house in a neighbouring beachside suburb and usually attend Mass.  I’m not sure why but my recollection of these Christmas eve Masses is generally associated with rain.  I’m sure it doesn’t rain every year.

After Mass we head to our friends for Champagne.  This is always quite a highlight.  Then it’s time to head home and Christmas Eve dinner can be anything from nothing (we ate enough at our friends) to takeaway to a meal at the local Pizza Restaurant.  We always like to be home in time to watch Carols By Candlelight—a Melbourne tradition at the Myer Music Bowl for as long as I can remember.

After children’s group Hi-5 has had its performances it’s time for the kids to go to bed so we can start wrapping presents.  (Don’t ask why we always leave present opening until the night before Christmas.  Maybe it’s because it takes me so long to wrap everyone else’s presents I can’t bear to wrap another one until the very last minute).  We do this while drinking wine and singing carols.

In Australia Santa is left beer and chocolate balls and carrots are left for the reindeers.  This is a very important distinction and the answer to a question Australian kids have been asking for quite some time.  You see here in the US it seems Santa is left a glass of milk and cookies.  In Australia we often wondered how Santa wasn’t pulled over for Drink Driving with all the beer he was drinking.  And now it’s clear: in Australia it gets very hot over Christmas so Santa builds up quite the thirst.  By the time he gets to the US it’s much cooler and he’s left milk in order to continue to deliver presents.  It also means he can get the job done rather than giving up half way.  Makes so much sense now.

In our house rule number one is no one can get out of bed until everyone is awake and we all go together.  This has been challenged over the years.  When it’s a civilised hour we can all get out of bed and sit around the tree.  We put Christmas carols on in the background and when everyone’s together we start opening presents.  That’s where rule number two comes in: we all say who the present is from then watch each open our presents.  I despise it when the kids don’t know where or who a present is from or that you’re so busy worrying about yourself that you don’t know who got what. 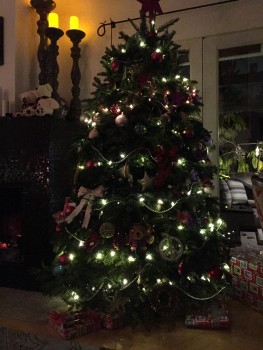 We wait til everyone’s up, Christmas carols are playing and everyone is sitting by the tree before we can start opening presents

After we’ve opened the presents we sit down to breakfast which consists of croissants, fruit and Champagne.  Then for me it’s all downhill from there.  That’s right it takes two days to prepare for Christmas lunch which is over in a matter of minutes.

Many families in Australia have opted for the more sensible seafood approach—it’s hot and it doesn’t make sense to have lunch based around those before us that spent Christmas Day in the cold.

For us it’s a hot Christmas dinner: Glazed Ham, Turkey and Pork with all the trimmings.  Until I moved to America I never thought to explain what all the trimmings are.  Now I understand I do.  We have roast potatoes (no sign of mash), roast pumpkin, gravy, cauliflower au gratin and beans.  For dessert we have Christmas cake and plum pudding.  I often try to make another desert too (sucker for punishment).  The desert of choice is Pavlova and every couple of years I get really motivated and make my favourite all-time desert, Sans Rival.  This is a Filipino torte made of layers of meringue with cashew nuts as it makes me feel like there’s a little influence of every part of us at our Christmas dinner table.

I also never thought I needed to mention that we (like all Australian &  British families) have Bonbons with our lunch.  Like a tug-o-war you both grab an end and one scores the goodies and the other misses out (or takes the contents of the next one until everyone gets something).  Let me tell you bonbons aren’t like normal things–no one ever wants two contents, it’s not one of those things.  Inside there’s usually a cheesy paper hat (shaped like a crown), an even cheesier joke and a little trinket gift (always bad and you’re lucky if they last the lunch out).

I mention it now because I realised they’re not sold everywhere so I’m wondering whether they have them here in the US as part of their Xmas traditions.  I saw them available at Target (and we saw a family crack them on Xmas night after dinner and before dessert at dinner in New York) but wonder why they’re not everywhere like they are in Australia.

This year we celebrated Christmas early.  On Sunday we woke up as if it was Christmas morning and did all of the above.

On Saturday night (our “Christmas Eve”) we went to a party in 90210.  A Hollywood producer, they had snow, an elf (a little man) and reindeer.  We were welcomed by carolers (you know? the ones on the movies in the 1950s) and then a photo opp with Mr & Mrs Klaus.  There was security at the door (relieved our names were actually there!) and the most amazing people watching I’ve been privy to to date.  It really felt like Christmas eve.

We love adding traditions from the places we’ve lived.  For example while we’re here in LA we’re embracing the “as-seen-on-TV” ritual of going to a farm to pick out your own fresh tree.

We’ve also embraced the Elf on the Shelf.  We’re loving seeing where the elf moves itself to when we wake each morning as it goes home each night to the North Pole to report the day’s activities (whether we’ve been naughty or nice) to Santa.  This is not something we do in Australia although I think he’s making his way over there too. 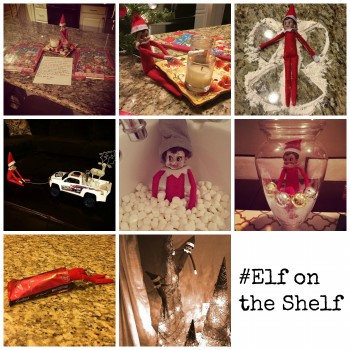 Just to keep it real I think it’s only fair to share with you that there are often tantrums, tension, high drama or at least moments of disappointment at our house.  For some reason the prospect and the romance of the ideal of Christmas is always far greater than the reality of Christmas.  As such Christmas Day at our place is more like an episode of the Griswold’s Christmas Vacation or Modern Family meets the Simpsons than the Brady Bunch.  Our memories are sweet but there’s always drama.

Merry Christmas to you & yours. However you celebrate it may be filled with more of the good than the bad.  And of course now I have friends who are Jewish so Happy Hanukkah to you too.

Carols By CandlelightChristmasChristmas in my houseChristmas party in 90210Elf on the ShelfHamOpening presents on Christmas DayPorlSnow in 90210TurkeyWhat to leave Santa on Christmas EveWhat we eat on Christmas Day
December 22, 2014 by ItStartedInLA 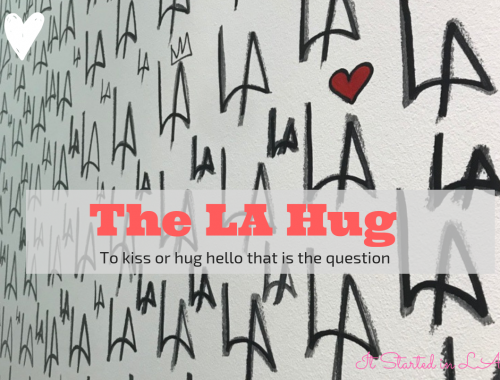 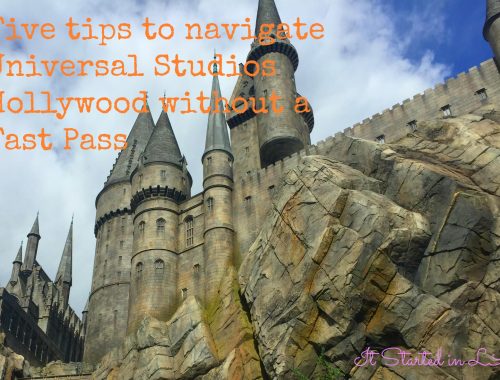