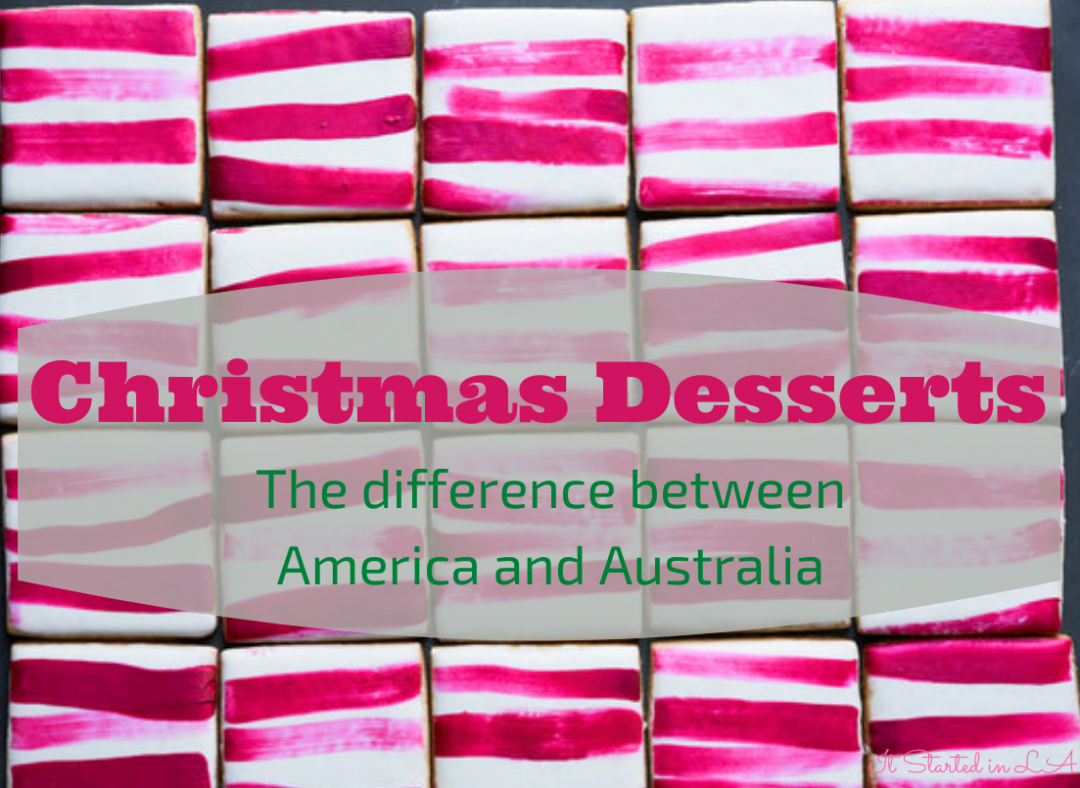 Differences between America and Australia: Holiday cookies versus Christmas desserts

This year we’re “stuck” at home for Christmas given we’re under Stay-at-home orders in California. It made me consider the differences between America and Australia when it comes to Holiday desserts. And lots of them!

We tend to fuss about dessert. The tradition is to make a Christmas cake and a Plum Pudding. Plus have a dessert at the Christmas feast.

Christmas Cake is a cake filled with dried fruit: sultanas, raisins, dried apricots and mixed peel (orange and lemon mainly) then soaked in Brandy when it comes out of the oven. It is very rich and appeals to an older palette (ie I hated it when I was a kid!). It lasts for weeks and is enjoyed all through January–the summer holidays. We take it on picnics, enjoying a day out on the Boat and to the Cricket–there’s no place off limits that you wouldn’t bring a few slices of Christmas cake. Sometimes it’s iced with marzipan and fondant and others are just plain. Before my palette changed I would take the Christmas cake just for the icing!

Plum Pudding is a boiled, ultra rich cake served warm with brandy custard. Small pieces are served, after the huge Christmas meal, along with other desserts. It’s very, very rich. When I was a little girl it would have “pennies” (actually 1c and 2c pieces) hidden inside. It’s funny how that would now sound gross but we loved it growing up.

We also make dessert. Usually it’s Pavlova—the National dessert that’s embroiled in heated discussion as to whether its origins lie with New Zealand or Australia.

Many homes across Australia also recognise their English heritage with a good trifle. Nothing screams trifle more than Christmas. And before you think godawful and stodgy then you haven’t ever had a good one: they’re sublime!

Then there are those homes across Australia that celebrate their Italian heritage with Panettone. Green grocers and specialty gourmet shops all over Australia stock their shelves with literally dozens of them in all different sizes.

We also traditionally make Rum Balls. These are probably best described as a lazy person’s truffle but equally delicious.  Made from Graham Crackers (although we use a type of tea biscuit–cookie–known as Marie biscuits), cocoa powder and condensed milk with the optional addition of Rum, and coated in desiccated coconut, these are a staple in most Australian households. And they’re often also left out for Santa when he calls in so Santa must get quite sick on Rum Balls and beer.

Celebrating our rich, diverse multicultural backgrounds I’m sure there are many more traditions brought over by families from south-east Asia China Lebanon and everywhere in between that I’ve also not been fortunate enough to share these traditions.

Exchanging cookies seems to be an American tradition. People make different types of cookies—although I think decorated sugar cookies are the most common—and these are a staple at most households during the “Holidays”.

If you participate in a Cookie Exchange, the deal is you get together for a Cookie Swap party. You each make two batches so everyone can sample a cookie and then have spares for everyone to be able to take cookies home. You also swap the recipe so the following year you have more recipes to choose from to share. So you go home with a fun time with friends, a sore stomach, more cookies and a booklet full of recipes from your favourite people. I love that idea of giving sharing and receiving.

Having said that, in my seven years of being in LA I have not once been to a cookie exchange. And, it seems many many of my friends have not either! In fact I’ve only really heard of two friends who have done them or participated in them! When we lived in Shanghai I remember the Americans there baking and sharing cookies. It might be safe to say it’s not necessarily a 90210 thing!

But if you’re looking for proof that the Cookie Exchange is a thing: Williams-Sonoma gives you proof!

Do Americans have Fruit cake for Christmas?

I’ve talked about the fruit cake with many different friends. There are very few houses (none!) I know if that make them or eat them.

They are more common in the South from what I can tell and a friend of mine’s dad’s client would send them a Fruitcake every year for Christmas.

And as I was finalising my blog I saw a friend post a photo of her preparing a fruitcake for her family on her Instagram. I’m so glad I caught that in time to go live. She wasn’t sure where the tradition came from exactly but she makes them for her family.

So what are the differences between Americans and Australians at Christmas?

First, a lot of my friends are Jewish so don’t celebrate Christmas, they celebrate Hanukkah.

Second, while cookie swaps are a traditional American thing, they’re not really an LA thing, except for a few pockets here and there.

In Australia we would often bring Rum Balls to each other’s houses at that time of year. I guess it’s similar to Americans bringing cookies to one another’s house.

It would be inaccurate reporting for me to say Americans don’t do dessert on Christmas Day—or Hanukkah. My guess is there would “pie” if some sort at their table. Of course it won’t be a meat pie rather a pecan or apple or something in between. But there will be pie!

But in Australia dessert at the Christmas table is plentiful and very, very filing! I guess that’s why the food coma would kick in sending everyone off for a nap!

So there you have it, Christmas wrapped up with a dessert twist!

Happy Hanukkah if you’re celebrating this week and Merry Christmas to those who celebrate!

May your 2021 bring a change in scenery and lots of social, in-person interactions!

PS: I’ll be making Christmas Cookies on my Instagram and Facebook Live today (Wednesday, December 8) at 5PM Pacific Time. That’s Thursday, December 9 at 11AM Eastern time and 12noon Brissy time because … Queensland … no daylight savings! Hope to see you then. 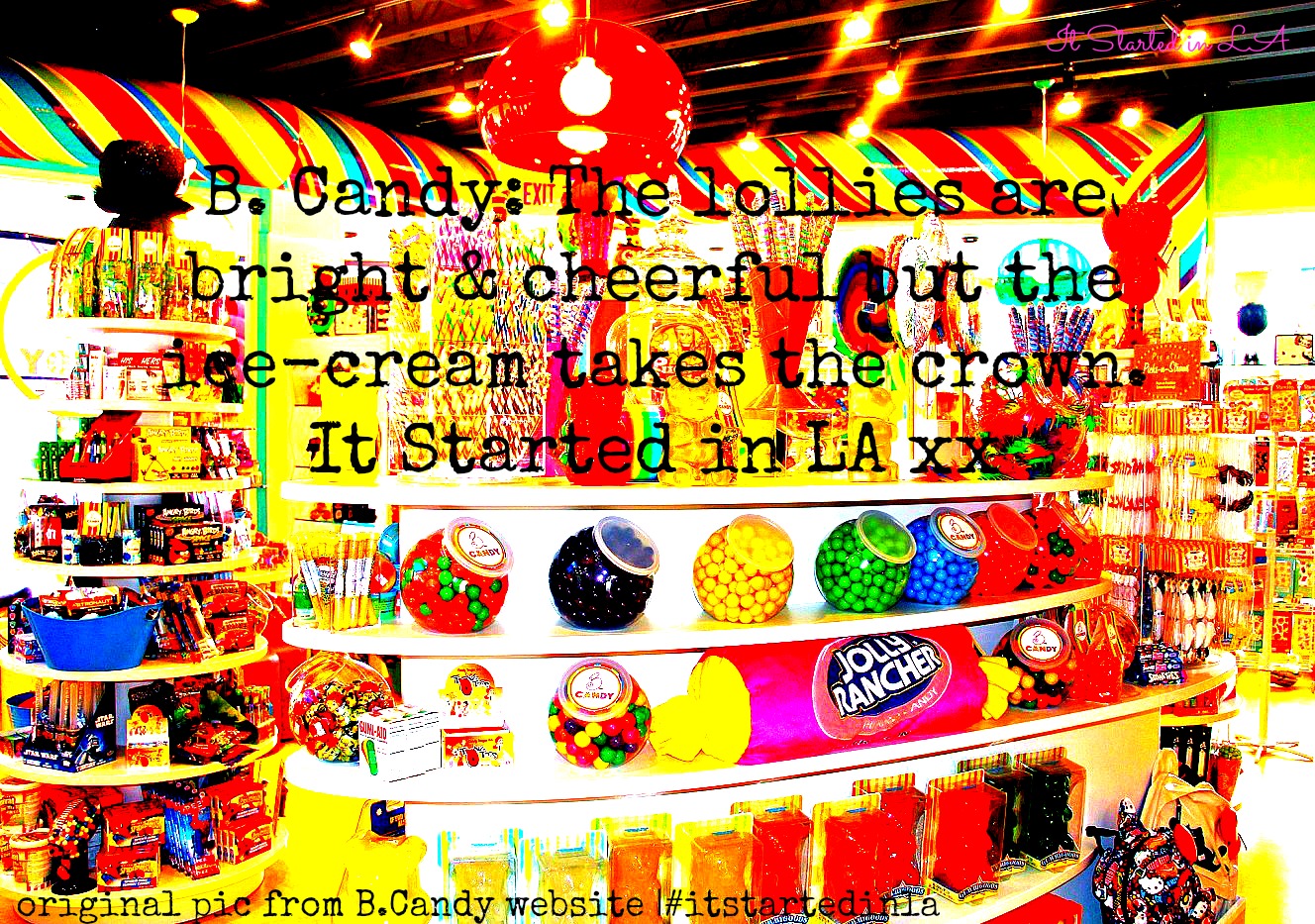 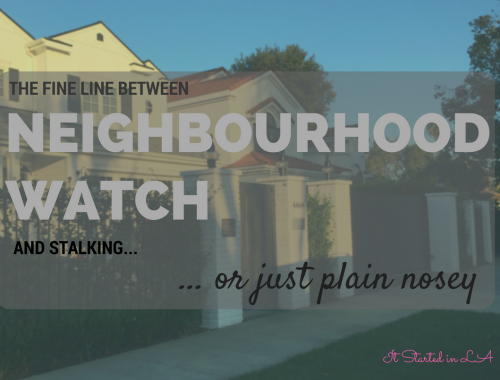 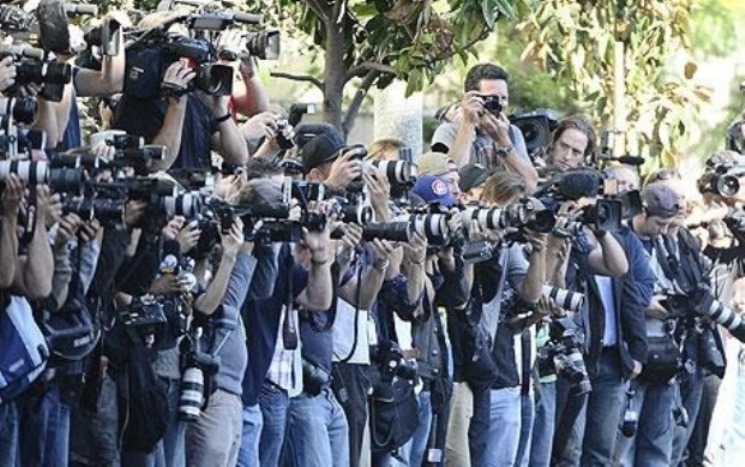